During the last two decades of the 20th century, at the Institute for Economic Analysis (IEA) at New York University, I authored or co-authored four books on subjects that are still timely:  military spending, automation and the displacement of workers, environmental degradation, and inequality.  While the contexts of these challenges have been transformed since then, they still constitute the main barriers to achieving sustainable development.

The first two books are joint with Wassily Leontief, the creator in the 1930s of input-output economics, whose vision for economics as an empirical science clearly anticipated the structural framework and detailed databases we rely on to study environmental sustainability and economic development.

There is still no information about the military economy in standard economic databases, including the input-output databases, which are compiled at national statistical offices. Written during the Cold War, the military economy is visible by introducing into the database a number of sectors producing output exclusively for military purposes. This made it possible to explicitly represent the geography of bilateral international trade in arms and related goods and services at that time.  We formulated alternative scenarios to explore impacts on civilian economies in the event of both further increases, and of significant reductions, in military spending. Today the cast of central characters has expanded, and the specific military goods and services are different, but the dangers and the prospects for increased military spending are great. It would be useful to explore how increased military spending would crowd out the resources needed to deliver on sustainable development goals to make explicit the trade-offs between the two.

This book assesses the likely impacts of automation on workers in the United States over the period 1970 through 2000. Case studies for each major form of automation assembled the data to quantify scenarios about technological changes, with particular attention to the impacts of employment requirements for different categories of workers. (My subsequent research uses a systematic case study strategy to compile kinds of data needed for analysis to address specific questions but not otherwise available.) Today this challenge has a new urgency associated with the vast and still broadening range of capabilities associated with technologies including artificial intelligence, 3D printing, drones, and blockchain. These concerns are intensified by the dramatic shifts in the international division of labor following the spread of these earlier technologies. Today developing countries are concerned to create industrial jobs for human workers, not jobs that are readily automated using imported equipment. A contemporary study could take on the prospects for job creation by innovating and customizing relevant technologies to meet sustainable development goals. 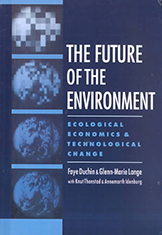 The study reported in this book was commissioned by the United Nations and the government of Norway to evaluate the recommendations in Our Common Future (OCF), also known as the Brundtland Report.  Our book examines the potential for reducing emissions associated with changes in the use of energy and materials under what we call the OCF scenario. The empirical data for quantifying scenario assumptions, in particular technological options for how electricity is generated in different economies or for the choice of construction materials, are organized in the form of ten case studies compiled from the technical literature. We conclude that the OCF assumptions about the kinds of actions that can indeed substantially reduce emissions of carbon dioxide, and the other gases studied, in the period through 2020, relative to pursuing the same development objectives in the absence of the recommended changes. However, many developing countries would need to incur significant debt in the absence of economic assistance. Even when these steps are taken, the OCF scenario shows increases in emissions in order to achieve targeted material standards of living, meaning that the measures are not adequate to achieve the intended objectives. My subsequent research on various aspects of sustainable development has built on this initial study.

This book provides an introduction to input-output economics, emphasizing its focus on economic structure. It describes the structure of household activities, technologies, and environmental challenges and provides simple models for calculating the implications of structural changes. While my other publications have delved deeper into technologies, resource use, and environmental problems, this is the first time I address the social dimension of sustainable development directly by distinguishing consumption patterns of different types of households. Based on the statistical analysis of a great deal of data from diverse origins, marketers have come up with a few dozen household categories, such that households in each category tend to have similar social values and behaviors and similar purchasing patterns. My idea was to use this kind of bottom-up approach to deduce household taxonomies rather than classifications based on one or a small number of variables, such as household income. I find that little if any progress has been made in the development of household classifications since that time and that such taxonomies will be needed to explore the likely impacts of scenarios about changes in lifestyles that are specific to sub-groups of the population of a given region.  Systematic collaborations between input-output economists and engineers in recent decades have substantially improved the representation of alternative technologies in contemporary input-output databases.   Comparable progress on alternative household consumption patterns, namely ones that improve material standards of living in developing countries without destructive environmental impacts, will require collaboration of economists with anthropologists, sociologists, and other social scientists.